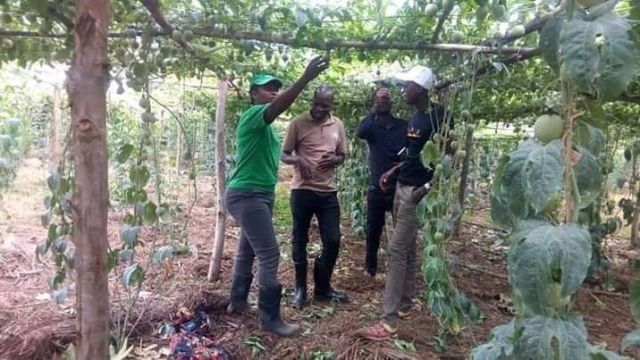 Living in Africa’s heart means to arrange with political incidents. Always a balance act that is not easily successful especially the rich Western World has enough own problems, China is increasingly positioning itself in Africa.

Otherwise you should emphasize also sometimes very pragmatic ideas such as from Nagawa Milly Phoebe, who founded the Mirembe Green Park with the ambition to motivite youths, schoolchildren, women, older people and girls who don’t go to school in the community to use strategically the scarce available resources especially in rural areas thereby to manage a sustainable subsistance.

After Doris got to know Milly in the widths of Facebook I offered her to go public with this interview to obtain more attention, also to bolster everybody else to campaign.

Lotar Martin Kamm: Would you like to tell us primarily about yourself, how your life proceeded before you have instigated this project?

Nagawa Milly Phoebe: My name is Nagawa Milly Phoebe female Ugandan aged 34 years a single mother of one child, rural farmer, social person with kind heart who has interest to see to it that the underprivileged segment of the community (Youth, schoolchildren,women,older people and girls who dont go to school and school dropouts) in the community get their livelihoods uplifted through sustainable self help projects.

I am resident of Kiteza village, Kitengesa Parish, Buwunga Sub-county, Masaka District in Uganda. Having completed a diploma Course in Business Administration in 2012, I concentrated on Agriculture as a business where I dealt much in Growing Vegetables and Fruits, Banana, Coffee, Apiary, Passion Fruit Growing and Piggery. After attending a four weeks training in Korea, I started a CBO (Community Basic Organisation) “Mirembe Green Park” with intentions to empower rural youths, school going children, women, elderly, people with disabilities, Orphans and girls out of school in the community to strategically utilize the available scarce resources especially land to create a sustainable livelihood.

My family is comprised of 8 members including six children including me and we thrive in a remote rural village Kiteza. We majorly grew up in the care of our mum and the stepdad after a mysterious death of my real dad, our education background was weak and this forced me to focus more on vocation training. In 2017, I decided to embark on horticulture as an enterprise. With the opportunity of Korean training, I decided to open up Mirembe Green Park as a project that trains and empower the rural women, children and the youth to overcome abject poverty and enabling them acquire decent education.

In my situation as a single mother, other women in Kiteza and Nakasojjo communities are living as single bread winner of their families; the most source of livelihood is subsistence agriculture which majorly depends on rain. This narrow livelihood base prompted me and my family to start a community based organization to empower the women and the children, older persons, disabled people, school dropouts plus orphans.

Lotar Martin Kamm: How our the circumstances locally? Did you have to fight with recistances or were there from the start a certain willingness for improvements?

Nagawa Milly Phoebe: I live in a rural area with scarce resources for example not electricity, no running water, children have to walk long distances to fetch water, go to school and financial opportunities are so limited. The only source of livelihood is through farming on small percels of land. In the beginning people did not understand me and my intentions given the fact that I have grown in the same community and my age.

Uganda’s population is estimated at 37.7 million of which 52 percent are females. Three in every ten households (31%) are headed females-households (UNHS 2016/17). Over 80% of Uganda’s populations live in the rural areas and agriculture is their main source of livelihood. Women constitute 76% of agriculture labor force compared to 65% of men, and subsistence farming is, by far, the main source of employment. Although women constitute the highest labour force in the agriculture sector, this is faced with challenges which are gender-based, coupled with social and geographical determinants for women´s employment. Women and girls are central to the sustainability of rural households and communities, improving rural livelihoods and overall wellbeing, but our role and significance is often overlooked.

In fact, we are almost half of the agricultural labour force in developing countries, in addition carrying out the bulk of unpaid care and domestic work within families and households. Our knowledge and experience in food security and nutrition, land and natural resource management, bring additional resources to resilience against the negative effects of the changing climate on rural livelihoods.

We the women farmers, we are just as productive and enterprising as their male counterparts, yet we are not always able to obtain comparable advantage from efforts. Nor do we have equal access to the land, credit, agricultural inputs, markets and the high-value agro food chains that are essential to better livelihoods. In this project, Mirembe Green Park is supporting women in using climate-resilient approaches to produce in extremely dry.

Through training and skills development, rural women can play a much greater role in the development of agricultural value chains, both as current and future agricultural workers and entrepreneurs. This needs to be further supported by the provision of decent work with established terms and conditions that can stimulate and secure women farmers’ participation in the agro value chain.

We have since lived with several constraints including cultural/gender based factors which for so long impended women from gaining out of their agricultural enterprises. We have for so long lived along with these bottlenecks. We stood by the test of time and grew by the desire to make continuous improvement as a mean to create sustainable communities.

Lotar Martin Kamm: For your part automatically evolve a political orientation with this project? One more reason to apply for District Councilor? The upcoming elections are coming soon now?

Nagawa Milly Phoebe: Not really because I was what I am before joining politics, politics just assisted me to lobby more for my people from government and other organisations and to understand community issues more and appreciate more.

Before the start of this project, I believe my leadership was groomed from home and church, in my church, I‘m a church leader for youth and as an elder sister to other six children; I played a significant role in modeling behavior for my siblings especially when it came at solving challenges and dealing with household tasks at home aftter my short course training in Business administration, my leadership skills grew stronger, this gave me an opportunity to get enrolled into the (KOPIA) Korea Program on International Agricultural Training. The skills gained gave me a golden opportunity to become a youth leader and mobilizer.

Later I became a strong advocate for the community marginalized groups including the women, elderly people, children especially those that drop out of school due to several challenges, in this regard, I initiated Mirembe Green Park to create a platform for public attention through advocacy. This might be the reason for applying for a position of District Councilor. However, due to unfair election process in Uganda, majority of population did not turn up to vote due to tensions. On another side, this has nothing to do in demotivating me and my team in reaching out to Mirembe Green Park Mission and objectives.

Lotar Martin Kamm: There were also setbacks on your way which you had to process? How do you deal with it?

Nagawa Milly Phoebe: Remaining focused, perseverance and persistence. We have witnessed several setbacks including social cultural, issues of globalisation and political environment. These nature of setbacks are outlined below Globalisation effects: there has been a wave of global effects due to increasing population, market demands; the results are on the nature affecting rain patterns because the population has encroached on nature for catering for factory and other industry activities. All these resulted into global warming.

At Mirembe Green Park we lack water for production thus making us dependants on natural rains. This expose us to serious losses and we are currently looking for strategies in drilling a stable water supply. Tentative strategies depend on simple technology of bottle irrigation, smart climate practices like contour planting, cover cropping and mulching.

Limited financial capital to acquire machinery needed in preparing enough acreage of land for high production. We believe that strategies for this setback are advancing for public marketing of the projects we intend to implement. The spread of Covid 19 has become another calamity in agriculture indirectly affecting prices and transportation of products to the east African markets which we majorly focus on during production.

Another challenge we face is lack of transport mean to push our activities in this rural remote area with poor road/communication network. Reaching to our vulnerable groups has not been efficient due to lack of motorcycle or field vehicle. This has greatly caused us to depend on expensive car or motorcycle hire increase we have outreaches Computer/laptop to carry out office work.

Lotar Martin Kamm: At the end of the interview I would like to give you the opportunity to get rid of what moves you, what I did not ask you.

Nagawa Milly Phoebe: Even in the most difficult situation, I have managed to move on, it’s not only due to my strength but behind me there is a highly motivated team and support of other external efforts. We have received continuous mentorship from different stakeholders including the (KOPIA) friends Korea program on Interntional Agriculture, Masaka district agricultural department, Uganda National Young Farmers Association plus Masaka District Young Farmers Association. This mentorship has been vital for continuous improvement and mobility.

Exchange visit to other farming organizations and agencies has opened the door to sharing experiences/lesson learnt and means of addressing key challenges encountered. with the exchange visits, it has expanded the resilience abilities to the challenges. Besides, the passion behind me keeps me going. I love to make change and bring smiles to the lives of the vulnerable/marginalized, am always happy to see broad smiling faces and once a look at them, it keeps me and the team going.

We thank you for your time and efforts in learning about Mirembe Green Park.
You can visit us at our site at any time.
Lots of thanks!

Lotar Martin Kamm: I thank you on behalf of the entire team. We keep our fingers crossed for you to master successfully this project.